At a large food manufacturer in Germany the system’s service costs were so great due to the age of the system that it was time for it to be replaced . At the same time, the old system was based on Freon 22 and it was therefore a requirement to replace the system within a number of years. 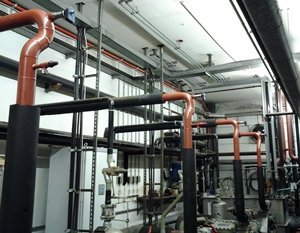 In the transition phase, where the Freon 22 system had to be kept running, 4 HBCP compressor protection sensors from HB Products were installed. This was carried out since the customer had experienced particularly high service costs for the compressors. There were numerous faults found with the expansion valves which in turn had often caused liquid to return back to the compressor.

The costs associated with compressor damage can vary between 10,000 and 60,000 Euro, depending on the extent of the liquid overflow from the evaporator or liquid separator as well as the make of the compressor. Liquid overflow is the system owner’s biggest nightmare! Once a liquid overflow begins, so does the discussion with the system manufacture and/or the compressor manufacture on the apportionment of liability. Apart from servicing costs, additional costs can easily add up for the days when refrigeration system is out of order.

Technical data:
HBCP is a new revolutionary, patent-pending sensor technology and it is the first sensor in the world capable of measuring the condition of gas and liquid refrigerant in a refrigeration system. HBCP is used for detecting gas quality at the intake found on refrigeration compressors. The sensors can thereby ensures that liquid refrigerant does not enter the compressor, causing damage to the moving parts.

The sensor has built-in data logs. All alarms are saved, so the sensor also functions as a “black box”. The data log can be read by connecting a PC. Similarly, the sensor can be set up using a PC.